Top 15 Companies with the Happiest Employees by Blind Happiness Survey 2020!

by THETECHMUSK
in IoT, TechNews, Trending
27 0
0

Satisfying your employees within companies is a big challenge for all! But this seems to be happy that someone around worldwide makes their employee feeling happy!

According to Blind here are 15 large companies with the happiest employees! that means employees are working with fun and doesn’t feel pressures within their work hours!

Blind is a trusted community where verified professionals connect to discuss what matters most. 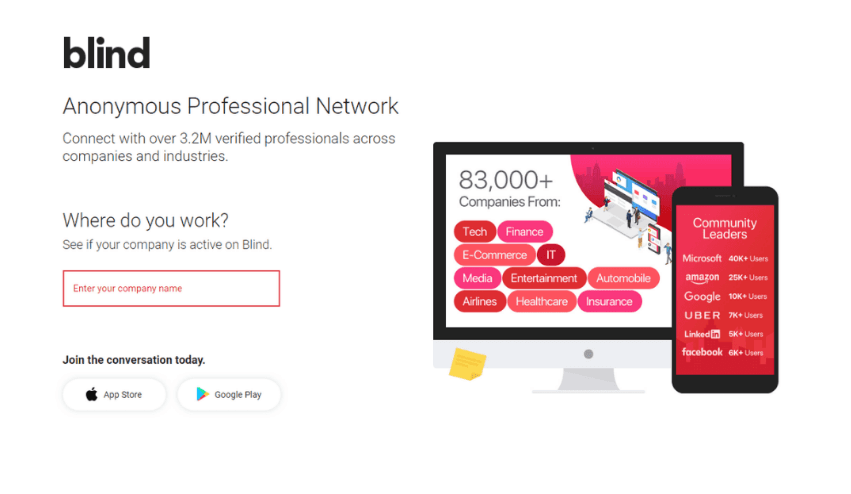 The will to win, the desire to succeed, the urge to reach 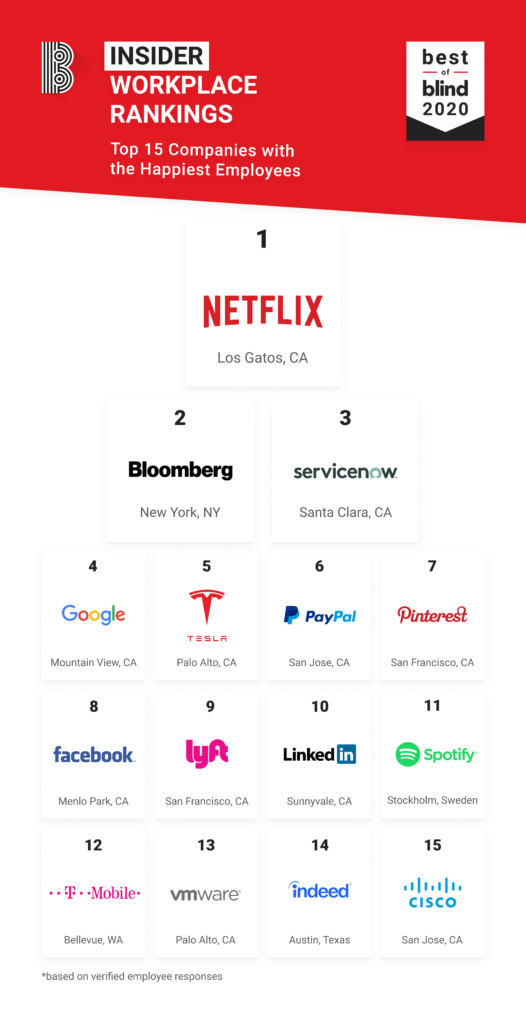 Netflix is the world’s leading streaming entertainment service with over 167 million paid memberships in over 190 countries enjoying TV series, documentaries and feature films across a wide variety of genres and languages.

Bloomberg is a media conglomerate that is a provider of financial news and information, research, and financial data. The main revenue earner for the company is its Bloomberg Terminal, which provides snapshot and detailed information about financial markets.

ServiceNow is a company that provides service management software as a service. It specializes in IT services management (ITSM), IT operations management (ITOM) and IT business management (ITBM). … ServiceNow was founded in 2003 by Fred Luddy. Company headquarters are in Santa Clara, California.

Google LLC is an American multinational technology company that specializes in Internet-related services and products, which include online advertising technologies, search engine, cloud computing, software, and hardware. It is considered one of the Big Four technology companies, alongside Amazon, Apple, and Facebook.

Tesla, Inc., is an American automotive and energy company based in Palo Alto, California. The company specializes in electric car manufacturing and, through its SolarCity subsidiary, solar panel manufacturing.

PayPal Holdings Inc. is an American company operating a worldwide online payments system that supports online money transfers and serves as an electronic alternative to traditional paper methods like checks and money orders.

Pinterest, Inc. is an American social media web and mobile application company. It operates a software system designed to enable saving and discovery of information on the World Wide Web using images and, on a smaller scale, GIFs and videos. The site was founded by Ben Silbermann, Paul Sciarra, and Evan Sharp.

Facebook, Inc. is an American social media and technology company based in Menlo Park, California. It was founded by Mark Zuckerberg, along with fellow Harvard College students and roommates Eduardo Saverin, Andrew McCollum, Dustin Moskovitz and Chris Hughes, originally as TheFacebook.com—today’s Facebook, popular global social networking website. Facebook is one of the world’s most valuable companies.

Lyft, Inc. is a ridesharing company based in San Francisco, California and operating in 644 cities in the United States and 12 cities in Canada. It develops, markets, and operates the Lyft mobile app, offering car rides, scooters, a bicycle-sharing system, and a food delivery services.

LinkedIn is an American business and employment-oriented service that operates via websites and mobile apps. Founded on December 28, 2002, and launched on May 5, 2003, it is mainly used for professional networking, including employers posting jobs and job seekers posting their CVs.

Spotify is a digital music, podcast, and video streaming service that gives you access to millions of songs and other content from artists all over the world.

VMware software forms a digital foundation that powers the apps, services and experiences that are transforming the world. VMware, Inc. is a publicly traded software company listed on the NYSE under stock ticker VMW. Dell Technologies is a majority share holder. VMware provides cloud computing and virtualization software and services. It was one of the first commercially successful companies to virtualize the x86 architecture

Indeed is an American worldwide employment-related search engine for job listings launched in November 2004. It is a subsidiary of Japan’s Recruit Co. Ltd. and is co-headquartered in Austin, Texas and Stamford, Connecticut with additional offices around the world.

How Netflix Excelled with DevOps?

What are the Best Tech Tools and Software to Invest in your Small Business?

No Result
View All Result